Addressing the special needs of high-achieving students in public schools

A Shared Science Campus (“SSC”) offers high-achieving municipal public high-school students a superior teaching staff and an advanced classroom environment, over what is typically found in Ethiopian secondary schools. For example, in an SSC:

• There are ample lab equipment and computer facilities.
• The science curriculum is deeper and broader.
• Theory is accompanied by student experiments, research materials, and university visitors.

Under our suggestion and lab funding, the first Ethiopian SSC was established in 2014 at Kotebe Metropolitan College (“KMC”) at the eastern edge of Addis Ababa. Twenty public municipal high schools are within KMC’s surrounding catchment area, and the available science education facilities were spread too thinly among those high schools. A teacher’s college transforming to a university, KMC wanted to lead a new kind of STEM enrichment program. 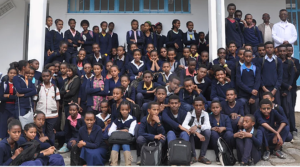 KMC and STEM Synergy jointly converted an existing on-campus building to house the pioneering SSC and its labs. Then we devised a plan to select approximately five of the highest-achieving students from each of the twenty high schools. SSC students were interviewed and chosen strictly by their merit. We were particularly proud that more females than males were selected into the SSC. The Kotebe SSC entering 9th grade class had a student ratio is 53 females to 37 males, and that demographic ratio has remained quite stable as the program has matured and expanded.

The biggest challenge experienced seemed to be convincing the parents to allow their high-achieving children to participate in the SSC program. The parents worried about Ethiopia practice of exam rankings as the main factor governing which university a student will attend.

Furthermore, we also wanted to introduce the nation’s influential educators to the new concept. So we held a two-day conference with both the parents and the Ethiopian educators. 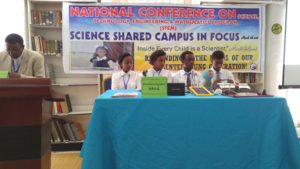 Subsequently, the SSC concept has indeed been spreading quickly throughout Ethiopia. Each SSC has 4 grades (9-12), and each grade has ~90 students. Each SSC starts with a new entering group of 9th graders. After four years of this process, the SSC holds ~360 students thereafter. 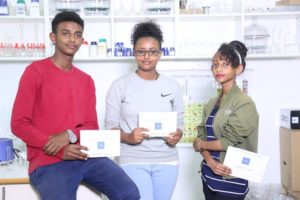 Mentors in the chemistry lab of Kotebe Shared Science Campus

Two more SSCs are expected to begin operations by the next school semester.

Moreover, as the advanced SSC education level becomes increasingly accessible, the many SSCs will likely instill a rising quality of STEM education across all public high schools in Ethiopia. Aim high, a rising tide will raise all boats.

NOTE : The initial funding of the Shared Science Campus program was provided by the Gelfand Family Charitable Trust, which preceded STEM Synergy. The success of the program subsequently expanded to more municipalities, which have absorbed virtually all of the program costs.